The county’s main jail on Water Street consistently has housed more inmates than its rated capacity even before California’s state prison overhaul in 2011. But since then, inmates have served sentences of one year or longer at county jails rather than going to the state’s overcrowded prisons.

If more inmates could be transferred to Rountree and then given more educational and training programs, it would reduce the main jail’s crowding and hopefully reduce recidivism.

“There are people in custody who are going to be here for quite some time,” said Lt. Jeff Skillicorn. “We want to maximize their availability for programming, and we don’t want them to go back to that (criminal) lifestyle.”

On Oct. 22, jail leaders will present a proposal to the Santa Cruz County Board of Supervisors that will seek nearly $25 million in state money from Senate Bill 1022.

Adopted in 2012, the law authorized up to $500 million in bond financing for the acquisition, design and construction of adult criminal justice facilities in California counties.

Santa Cruz County wants a slice of that money essentially to add 64 beds at its Rountree Detention Center as well as classroom space for more educational and vocational programs.

A similar bill, Senate Bill 365, has Monterey County poised to receive $44 million for new jail construction when the governor’s approval this month.

Santa Cruz County’s plan essentially would renovate an unused building at the jail at 90 Rountree Lane, which is between Watsonville and Sunset State Beach. There are two main buildings and a temporary classroom now at the facility. 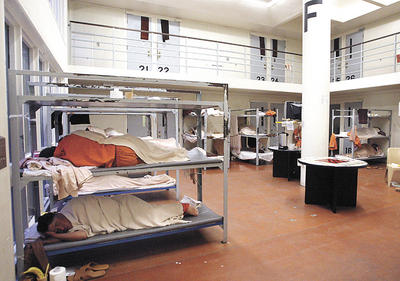 If the County Board of Supervisors approves the plan this month and state leaders approve it in January, construction at Rountree would start as early as April 2015 and finish in 2016.

“It would be good for inmates, relieve overcrowding and make it a safer environment for staff,” said Santa Cruz County sheriff’s Lt. Shea Johnson, who authored the proposal. “County jails were never intended to house people for a longer period of time, so we need to come up with solutions.”

Rountree already has a workforce re-entry program, English as a second language, GED tutoring and other programs, but jail leaders said that longer-term inmates could benefit from college preparatory classes. Details on the type of vocational courses and whether more staff will be needed to teach them are expected in the report to the Board of Supervisors on Oct. 22.

Rountree’s population has hovered around 100 inmates in recent months, though its rated capacity is 94.

At the main jail on Water Street in Santa Cruz, conditions have been crowded.

The average daily population has been 352 inmates from January to July — 41 more that its rated capacity of 311 inmates. Two of the jail’s 16 units have plastic, portable beds on the floor rather than bunk beds, jail leaders said.

Fewer inmates at main jail means some of those temporary beds would be removed.

Trey Powell, a 23-year-old inmate, wrote a letter to the Sentinel about the beds, which are “placed directly on the floor.”

He said, “I can tell you firsthand that the jail isn’t just at capacity, but grossly over capacity.”

SANTA CRUZ COUNTY BY THE NUMBERS

*** No public meetings are currently scheduled ***